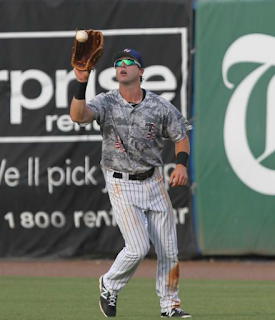 Jim Callis, senior writer for MLB.com and MLBPipeline.com, may have raised some eyebrows when he named Tampa Yankees centerfielder Dustin Fowler one of the reasons he thinks the Surprise Saguaros are the most talented team kicking off the Arizona Fall League season this week.

After all, the unheralded 20-year-old 18th-rounder is one of the youngest players in a league dominated by Double A and Triple A prospects who average three to five years older, more than a few of whom have already seen some major league duty – not to mention he’s merely a taxi squad member on a roster peppered with Top 20 prospects and only eligible to play twice a week.

But for the powerfully built lefty-hitting former wrestler and football player from West Laurens High School in tiny Dexter, Georgia (population: around 500), a coveted assignment to play alongside and against many of MLB’s best prospects in the AFL is only the latest surprise in a breakout season that’s been full of them.

“It obviously came out of nowhere,” he told HardballScoop.com. “I wasn’t expecting it to be this year.”

A speedy six-footer who has caught the organization’s eye with his tantalizing blend of major league-potential grades in all five tools coupled with a relentless work ethic and coachability that has translated into steady improvement, Fowler has shot through the Yankees system like a comebacker through the box, jumping four levels since a brief stint in instructs following the 2013 draft; culminating this year in 487 AB between Charleston and a mid-season promotion to Tampa for a combined .298 BA, good for third best among all full-season prospects in the Yankees’ farm system, 70 RBI (second best) and 30 SB (fifth best).

“He’s strong, he has bat speed, his routes are good, he’s a plus runner, he’s getting better and better all the time,” said Tampa Yankees manager Dave Bialas, who played in the AFL in its inaugural 1992 season and managed in it eight year later in 2000. “It’s good for a player like Fowler to see some older players. ...He’s going to see some pretty good pitching. It’s going to be a good league for him.”

Fowler, who as a member of the High A Tampa Yankees already routinely sees players two to three years older, appreciates he got the AFL assignment because the Yankees want him to see and learn from even older, more accomplished players, and he’s candid about the particular areas he'll need to be watching and speaking with them about to upgrade his own game and make the most of the opportunity.

“Trying to get more walks, see more pitches, get deeper in the count,” he said. “Sometimes I’m too aggressive.  I trust my hands too much right now and it hurts me in cases. Stealing bases I can get better, work on that, get a little bit quicker… get jumps and figure out how to read balls a little bit better and a little quicker."

If Fowler does indeed keep getting better like Bialas expects and the Yankees hope, it should surprise no one if his 2016 Tampa Yankees season includes yet another mid-season promotion -- this time to the Double AA Trenton Thunder.