It's The Gillooly Option For C.C. Sabathia: Girardi Gave Hints Knee May Be End Game 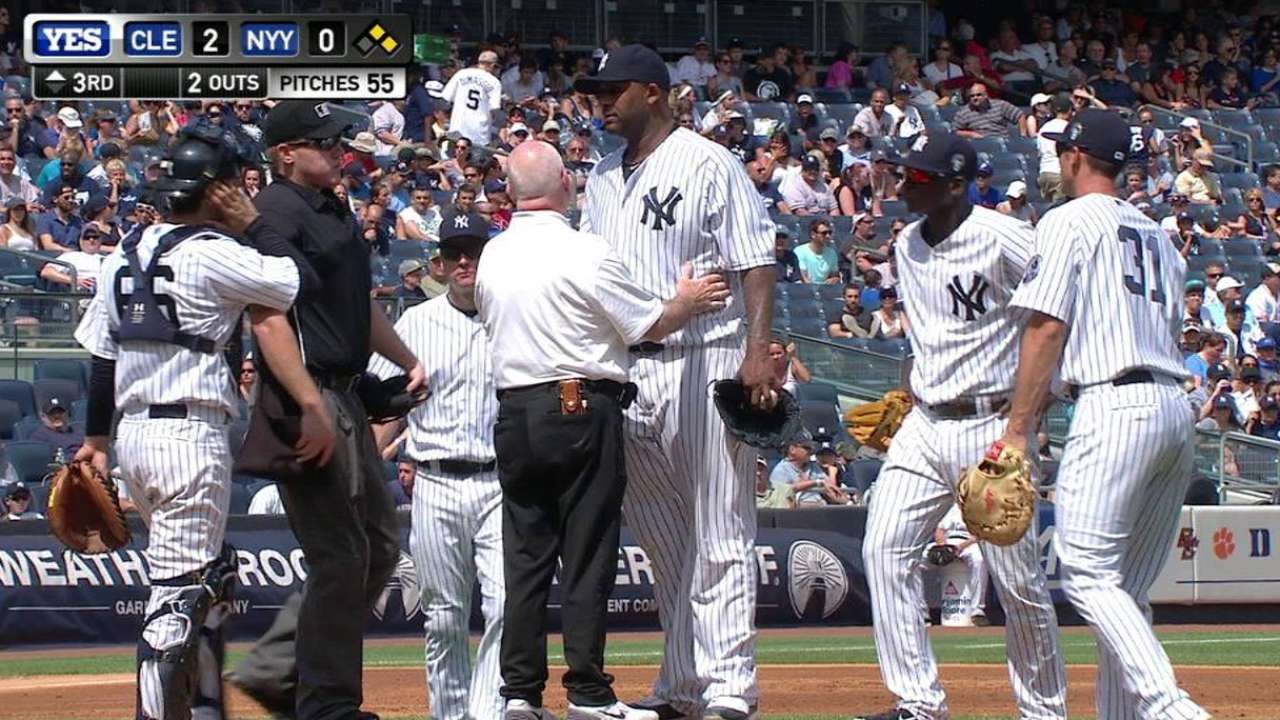 The Gillooly option is at hand.

Of the three possible final exit scenarios for Yankees' starting pitcher C.C. Sabathia detailed in my blog for several months now, it looks like Option #3 -- the one explicitly mentioned last month by manager Joe Girardi -- will be the door through which Sabathia is finally pushed from the Yankees' starting rotation forever.

Early reports quote Sabathia saying he blames pushing through discomfort in his surgically-repaired right knee to throw his fastball harder as the cause for his impending exit. Another way to put that would be he never mastered the ability to get outs three times through a batting order any other way this year.

Could he possibly have found those necessary skills had he acquiesced to a role in the bullpen to diligently search for them as Option #1 might have afforded him? Might the Yankees have been able to get anything useful in return for him had they shopped him around and offered to eat most of his remaining salary as Option #2 might have afforded them?

Nobody will ever know now.  Of the three options, the third was the one offering the least added value to the team. However, it was probably the one affording Sabathia the least humiliating exit. So for those who place a value on such things, there's that at least.

[Update: Sabathia has at long last indicated a willingness to pitch out of the bullpen, but early reactions from the team to that offer are, not surprisingly,  guarded and subdued to say the least. ]

Below, I have re-published my July 5th post that identified the options and Girardi's first hint Option #3 had become Sabathia's most likely end game.

Toward Pushing Him Out The Door Forever

Sabathia, in an all too familiar pose this year, watches one leave the yard.

It's taken them long enough, but the Yankees have finally decided it isn't too impolite after all to ask C.C. Sabathia, their highest-paid, worst-performing player to take a few days off and use the time  to work on his problems in extra bullpen sessions rather than during games.

By all accounts, including  team beat writer Brendan Kuty's, Sabathia's reaction to the idea he should be treated like any other player whose performance had slipped to the bottom of his peers in MLB was less than noble.

Interestingly, in announcing that Ivan Nova would take Sabathia's normal turn in the rotation against the Rays today, manager Joe Girardi also opened the door a crack to yet another remedy to the Sabathia dilemma should the extra bullpen work prove fruitless by mentioning he thought the pitcher "could be dealing with issues with the right knee that caused him to miss almost all of 2014 and worried the Yankees in spring training."

As I've noted before, there's only three possible doors the Yankees can push C.C. through to get him out of the rotation where he's blocking better pitchers in the system and blowing up leads every week:

1) Sending him to the bullpen and converting him to a reliever so he doesn't have to face batters more than once or twice  per appearance,  which would improve his chances to become a team asset rather than a liability and rebuild his value -- a tactic that has had proven success elsewhere but would require his cooperation and willingness to admit he has serious problems, an as-yet-unrealized development;

2) Designating him for assignment with an offer to eat the vast majority of his remaining $53 million salary in the hope of getting a useful trade piece or two in return, or

3) The Gillooly option: Finding some medical excuse connected to his prior surgeries to send him on extended leave via the disabled list and then forcing him to the minors for rehab starts to fix his problems there-- assuming, of course, they're fixable.

Don't look now C.C. but those footsteps you're hearing may finally be headed toward one of those doors.