Was Yankees' 15 Runs Message Or Mirage? Braves' Wisler Will Provide The Answer

[Post-game postscript at end of article for the answer.] 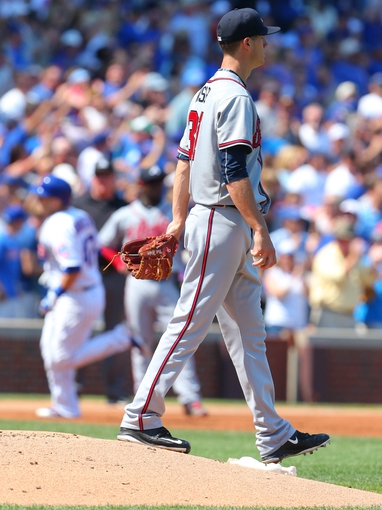 Did the Yankees send a message Friday night their great scoring slump of 2015 might finally be over or was it just a mirage?

Coming off a 15-run outburst that exceeded their total offensive output for the prior five games, the Yankees will learn the answer Saturday in the second game of a three-game series against the Braves -- and they'll have only themselves to blame if they don't continue digging their way out of their recent offensive ditch against Atlanta's struggling pitching prospect Matt Wisler.

A former seventh-round Padres draft pick who came to Atlanta in the Craig Kimbrel trade in April, the 22-year-old righty has been throwing batting practice to left-handed batters in the 12 starts since his June 19th debut to the tune of a collective .357 batting average (45-for-126) with 20 of those 45 hits of the extra-base variety, including nine home runs, giving him a grisly 1.100 OPS against southpaws.

The Yankees lineup that put up 15 runs Friday night was all lefties and switch-hitters with the exception of pitcher Masahiro Tanaka, and should be in a position to exploit this weakness like few other teams can.

His 5.42 FIP and 70 ERA+ suggest his 5.43 ERA is no mirage and a spot-on accurate portrayal of his run-prone generosity.

Wisler is made-to-order cannon fodder for the Yankees bats and should be the perfect barometer to gauge the state of their slump.

If they light him up, it would at least mean they're hitting pitchers throwing baseballs they're supposed to be hitting, and that would spell genuine progress toward putting the slump behind them.

If they can't light him up and send him packing early, though, it will serve notice Friday night's 15-run game was definitely more mirage than barrage.

[Post-game postscript: The Yankee beat the Braves 3-1, but the struggling Wisler turned his season around with his first quality start in more than a month against them. The following game summary from the Atlanta Journal-Constitution wraps it up nicely:

"The Yankees scored a run on a wild pitch in the first inning and led all the way in a 3-1 win against the Braves, who stranded two runners apiece in the seventh and eighth innings. Braves rookie Matt Wisler had a strong performance, allowing four hits, two runs and four walks in six innings. But Yankees rookie Luis Severino was even better, pitching six shutout innings (four hits, three walks). The Braves have lost 11 of their past 12 games."