Eovaldi Evolving Into A Dominant Force
In Yankees Rotation ... And Just In Time 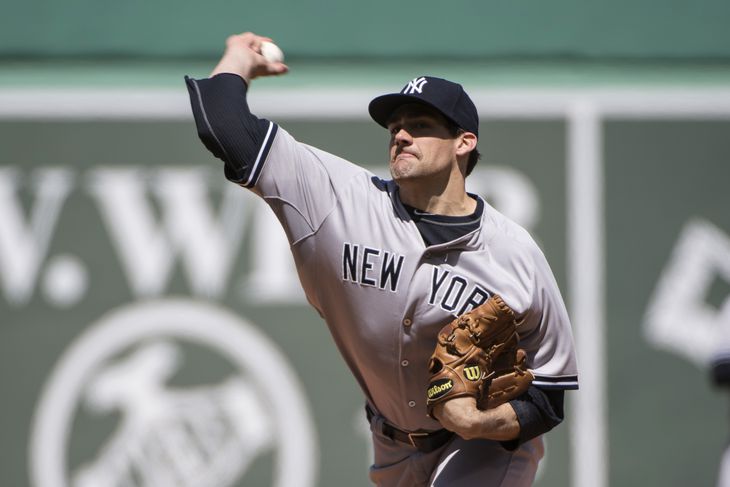 The Martin Prado-Nathan Eovaldi trade looks better every time the young fireballer steps on the mound.

The 25-year-old took another giant step in his development toward becoming a dominant force in the Yankees rotation Saturday with an efficient 6.2 inning 2-run start that gave him his second win and dropped his ERA back below 4.00 for the first time since his 7-inning shutdown of the high-powered Detroit Tigers three weeks ago.

Consistently locating his high 90s fastball and knee-buckling slider for strikes to lefties and righties alike, he kept Boston hitters in a defensive swinging posture throughout; and with the exception of a 4th-inning mistake pitch that Dustin Pedroia hit for a solo home run -- the only extra base hit he surrendered -- the Red Sox never looked comfortable against him in the box. He struck out two, walked only one and most struck balls were lazy flyballs and groundouts.

His final line was even more dominant than it appeared in the box score. After walking his first batter of the day with two outs and a 3-1 lead in the 7th inning, manager Joe Girardi decided to give reliever Chris Martin a chance to close out the inning -- and Eovaldi was forced to watch from the dugout as Martin promptly coughed up an RBI double to hang him with his second earned run.

With Masahiro Tanaka out for at least a month nursing wrist tendonitis, it was exciting to watch Eovaldi duplicate his ability to provide precious length to go with his emerging skill at throttling a potent lineup three times through the order.

Until more precise return dates for the rehabbing Tanaka and Ivan Nova are known, fellow gunslingers Michael Pineda and Eovaldi represent the best hope this rotation has to continue the team's series-winning ways.