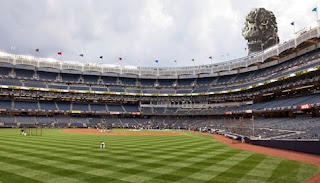 In the aftermath of the Yankee's 12-1 curb-stomping Friday night at the hands of the reigning AL champion Royals, the humiliating dethroning of newly crowned strikeout king Big Mike Pineda and the team's fourth consecutive loss, Yankee Universe had exactly two things to cling to the next morning.

The first was that the team was still in sole possession of first place, but somehow that didn't seem to be making anyone feel any better as the lineup had one again gone ice cold facing a replacement level pitcher. The second was that Alex Rodriguez is continuing to author a comeback story for the ages, doing everything through hot spells and cold alike to will the team to score from his new role as a full-time DH.

For the second game in a row, he was central to the team's only run scored in an otherwise pitiful teamwide effort at the plate. After launching a bomb to break up a shutout in the  Rays series finale, he started and finished the only scoring sequence of the Royals series opener by leading off the top of the 4th with a double, advancing to third on a heads-up baserunning play when shortstop Alcides Escobar looked for a moment like he had speared a grounder up the middle by Mark Teixeira, and then scoring on a Brian McCann sac fly.

And for six more outs, the Yankees were back within a run and had hope again.

Saturday night, he once again sent one deep late, slamming the door on the Royals in the 9th inning with an insurance home run in a badly needed win to end a four-game losing streak.

Producing runs and bringing stability and hope to a schizophrenic offense is what Alex's season has been all about, and more often than not it's been rewarded.

Near the end of spring training, I projected that, given his time off to get healthy and train coupled with his well-known work ethic and relentless motivation to excel, it was reasonable to expect Alex to have a season similar to Hideki "Godzilla" Matsui's celebrated 2009 swan song.

It was, to say the least, a minority opinion at the time.

As it turns out, he's on pace to blow Matsui's 2009 numbers out of the lineup and send them to the bench.

Think about it, Hal. Alex is your very own new and improved Godzilla.  Running wild in the Bronx at your ballpark. He's making Yankee history right now before our eyes in a year nobody gave the team much of a chance -- and they're in first place now due in no small part to him.

There's also a very good chance he could be the only Yankee All-Star this season and he's probably a lock for Comeback Player of the Year too.

You can't market that?

I get that you have the right not to exercise your option to pay for milestones you feel are unmarketable. But what Alex is doing this year is Godzilla 2.0. tell-your-grandkids type of stuff that will go down in Yankees lore and, yes, the lore of baseball itself.

So whaddayasay, Hal? Exercise that option and pay the man his $6 million. Right now.  Not for the old history you can't market, but for the history he's making right now that you can. Give the fans something to smile about when all the bats but ARod's go cold.

Because this team could use some new history, especially during the down times -- and the new Godzilla is a pretty great story about second chances and redemption anytime.

It could be a monster best-seller -- if it's marketed right.

Please think about it, won't you?